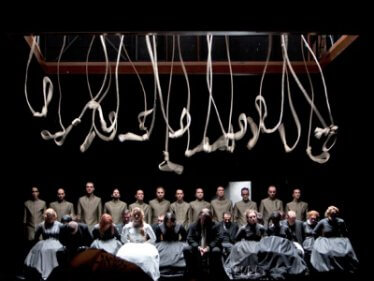 Dramma lirico in four parts
Libretto by Temistocle Solera
First performed on 9. March, 1842 at Milan
Premiered at the Deutsche Oper Berlin on 8. September, 2013

“Va, pensiero, sull’ali dorate” – Take flight, thought, on golden wings”. When those words first rang out in the Milan Scala on 9th March 1842, sung by the Hebrew slaves chorus in the third act of NABUCCO, Giuseppe Verdi's new opera, the master was making history. The “Slaves Chorus” was quickly adopted as the unofficial national anthem of a not-yet-unified Italy and the hopes of a generation of opera-goers were suddenly vested in the young composer.

The dramatic tale of Israelite subjugation under the Babylonian yoke of King Nebuchadnezzar remains one of Verdi's best-known operas and was last staged at the Deutsche Oper Berlin by Hans Neuenfels 13 years ago. In Verdi's anniversary year 2013 the material was being rendered by Keith Warner, one of the big names in international opera. The Englishman has directed LOHENGRIN at the Bayreuth Festival and THE RING OF THE NIBELUNG at Covent Garden and more recently for the Copenhagen Opera. Set in the same period that the piece was written, a time of transition from feudalism to a bourgeois, industrialising society, Warner's NABUCCO focuses on the opposing natures of two nations – the modern Hebrews, whose culture is informed by a script and by education as a democratic ideal, and the militaristic Babylonians, whose concept of a state is founded in autocratic rule.