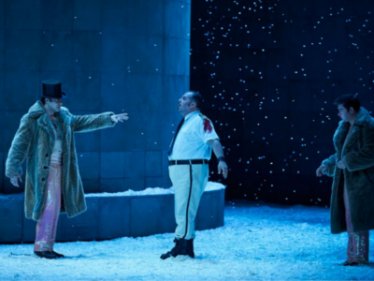 In French language with German and English surtitles

The work revolves around a young girl – Marguerite – who is seduced and believes in true love, but love is her downfall. She is surrounded by men, all with their different yearnings: Faust is dreaming of youthfulness and passion; Méphistophélčs is cold and voyeuristic, Marguerite’s brother Valentin sees her as a status symbol, as his property. And Siebel, whose feelings are pure, loses out completely.

Charles Gounod isolates the individual destinies in “Faust”, Goethe’s philosophical drama, and weaves them into a florid, almost cinematic study of love and associated issues involving hope and self-doubt, bliss and devotion, and disillusionment, madness and loss of civil rights, big themes that make Gounod’s FAUST a great opera bursting with high sentiment. With hits such as Marguerite’s Air des Bijoux, Méphistophélčs’ Golden Calf rondo and chorus pieces that include the Faust Waltz, Gounod’s FAUST ranks with CARMEN and THE TALES OF HOFFMANN as one of the best-loved French operas of the 19th century.

Philipp Stölzl’s works are known for their grand images and their subtlety in psychological matters. In recent years Stölzl has directed films such as “North Face”, “Goethe!” and “The Physician” along with opera productions at the Salzburg and Vienna Festivals, the Theater Basel and the Staatsoper Berlin. After RIENZI and PARSIFAL, FAUST is his third production as director at the Deutsche Oper Berlin.
Show more Show less