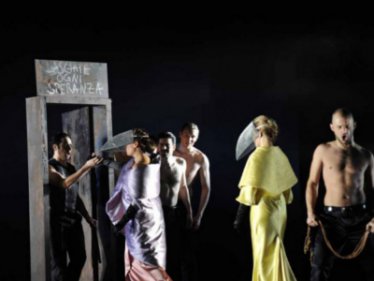 “Where have you gotten the deranged rights to which you've dedicated your life?”, asks George Sand of the legendary figure. He casually confides in Gottfried Benn: “I once had the dream that a young birch tree gave me the gift of a son.” No other fictional character of modern times has had more public attention than Don Juan, that “seducer of Seville”, who emerged in 1613 from the pen of a Spanish monk. Only seven years younger than his compatriot Don Quixote, since that time he has made his way through dramas, epics, novels and operas, and eerily wandered over cinema screens and plasma monitors. Against the backdrop of different moral attitudes he brags – monuments and icons – of his famous tricks, pitted against death which he casts as a stone shadow. “Mine will be hell!”, Lord Byron heard him say.

On 29 October 1787, conducted by the composer, the overture to a dramma giocoso about the race with death of DON GIOVANNI begins with a piercing chord in the Graf Nostitz National Theatre in Prague. In retrospect, in the history of music theatre, this moment can be likened to the big bang. In order to set the mood for placing himself in the role of the unbridled libertine and blasphemer, the librettist Lorenzo da Ponte had to repeatedly flirt with the daughter of his landlady. Mozart himself, who had achieved success with his FIGARO one year before, composes under enormous pressure of time for a fee of 1000 guilders. The overture is completed only by 7 p.m. on the evening of the first performance. Søren Kierkegaard sees a “bolt of lightning” that “makes its own way from the darkness of the storm cloud, more unsettled than this and yet just as steady in time. Hear the emotion of unbridled desire, hear the rustle of love, hear the murmur of temptation, hear the turmoil of seduction, hear the moment of stillness – hear, hear, hear Mozart's DON GIOVANNI!”

The descent into hell to which the archetype of moral abjection was condemned until now is seen in terms of his soul. For his demise, the entire metaphysics of the west is called into play. But this not only confirms the indignation of the persons wronged, it also elicits dismay. At the threshold of the French revolution, the freedom that the libertine extols against the decree of humility characterises him as the very prototype of anarchy. His unbridled manner, peeled from a life designed from hormonal dictates, reflects the compulsive longings and self-realisation fantasies of generations to follow.

The 19th century will reveal his close relation to the figure of Faust, melancholically leaving him to the realm of psychoanalysis. Julia Kristeva finds in him the “son of a mother who becomes a dreamer with her husband and passes this on to her child that he may conquer all women as no one ever before”. Albert Camus finds it improbable that he could experience sadness. As with the “laughing, the victorious impudence, the erratic”, the profoundly mundane that the French philosopher diagnoses in him, can in fact be deceiving! – The restless figure ponders with D. H. Lawrence: “Where is there peace for me? The mystery must fall in love with me …”

What drives the seducer through the bedrooms of the centuries? What haunts the hunter? Who is this man really, who always means only?

* * *
Part One – The impotence of freedom
Coming out of the darkness – Don Giovanni. Now that he’s getting on in years, the “seducer of all seducers” has acquired so many faces! But who is he really?

7. The Donna Anna Syndrome
As the story goes: Don Giovanni murders the father of his lover, Donna Anna. Like so many times before! He leaves an enigmatic card beside the corpse. The countdown begins … Donna Anna conceals her affair with Don Giovanni from Don Ottavio, her groom. Seeing her father’s corpse, she swears vengeance. From now on revenge is the mantra of her troubled conscience.

6. The Donna Elvira Complex
As the libretto intended it: Donna Elvira, a “discarded” lover, confronts Don Giovanni. Leporello, his servant, points out the insignificance of her own personal suffering in comparison with the countless broken hearts Don Giovanni has left in his wake. A mysterious card is also intended for Donna Elvira …

5. The Zerlina Situation
As the dramaturgy would have it: Zerlina and Masetto marry. Don Giovanni seduces the bride – his image leaves him no choice – right under the nose of Donna Elvira and the groom. And then he deals out another of his strange cards … Donna Anna and Don Ottavio find allies in Donna Elvira and Masetto for their revenge on Don Giovanni. Zerlina will be their decoy. Freedom has a party. The avengers gain entry and set upon Don Giovanni. He willingly lays his head beneath the sword raised by Don Ottavio. It’s all over now! He has long awaited this moment. Yet hope is a joke with no punch-line. Chaos, his loyal companion through the centuries, takes hold of him.

4. Innocentia
The morning after. A girl. Dead people are heavier than broken hearts. There are still three cards left …

3. The Comedians’ Hour
As the dramma giocoso needs it: Disguised as Don Giovanni, Leporello is supposed to distract Donna Elvira. The comedy of errors takes its course. Don Giovanni lures Masetto into a trap. – There are two cards left … Leporello’s cover is blown. He barely escapes the avengers.

2. Master of Horror
At the graveyard. The voice of the dead commander. Don Giovanni invites the dead man to join him for supper. The last one, he hopes. The course is set for the Last Judgement … On the ruins of their relationship Donna Anna, grimly holding on to her life lie, and Don Ottavio, an unspoken suspicion inside him, resign themselves to the gentle horrors their cold marriage holds in store for them. Don Giovanni still has one card to play. – The last trump …

1. The Don Giovanni Principle
Don Giovanni awaits his true judge. Donna Elvira beseeches him to let go of his plan, but to no avail. Too much has been said, made up, written about him. After all the centuries of interpretation, there’s no room to move. On the track of interpretations, Don Giovanni is well on the way to meeting his fate. Before long, the tribunal calls him to the dock. Heaven and hell crank up the engine of doom. The last card has been drawn. But who is it for? The countdown is over. – And once again nothing’s happened. True hell is repetition. Heading into the darkness, towards the next interpretation – Don Giovanni …
Show more Show less