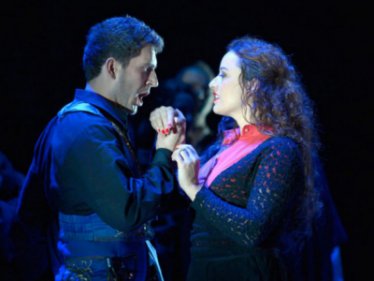 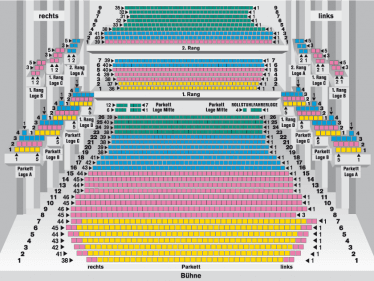 Opéra comique in four acts by Georges Bizet
Libretto by Meilhac and Ludovic Halévy,
based on a novella by Prosper Mérimée
First performed on 3rd March 1875, in Paris
Premiered at the Deutsche Oper Berlin on 11th May 1979
Revised version on 8th March 2008

Sensuous, offensive and devoid of all civic sense of morality: CARMEN, Georges Bizet’s story of a fatal love triangle, scandalised the audience at its premiere at the Paris Opéra Comique in 1875 and spent years playing to small, fringe audiences as a result - unimaginable today, the work being the household name among operas. The tale of Carmen and Don José, at once banal and existential, ends with an inevitably tragic murder. Carmen’s absolute need for freedom and her insistence on relationships based on complete independence and equality make her irresistible to Don José, who nonetheless proves unable to tolerate her urge to defend her liberty. A victim of his own desire, he is finally driven to destroy his lover and himself with her.

To convey this tragic material Bizet succeeded in using the medium of an opéra comique that presents us with all the emotions and traits of the human condition – levity, drabness, silliness and stoniness, seduction and playfulness, cruelty and destiny. Of all the familiar features of the work, perhaps the best known is the original Cuban »habanera« used by the tobacco worker Carmen to attract the attention of Don José. The music of the opera, filled with catchy melodies, is dominated by dance routines and Spanish rhythms. The savage, romantic country beyond the Pyrenees enthralled Georges Bizet among many others, and »Carmen« is today considered the central work expressing French yearnings for their unknown, idealised neighbour to the south. In 19th-century Paris this operatic depiction of fated lovers, with its erotic overtones and its tension between absolute devotion and undiluted liberty, could only be performed where bourgeois boundaries, both spatial and ideological, had been rejected.