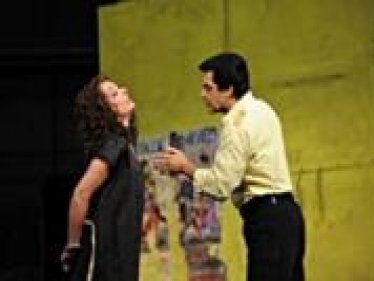 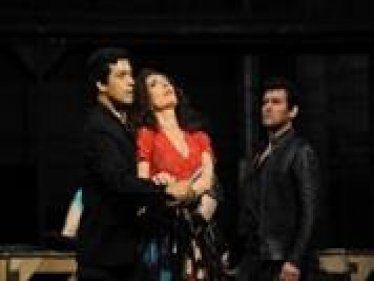 ACT I
A square in Seville, with a guardhouse and cigarette factory
Micaela looks for Don José, but he will not be there till the guard is changed. Urchins mock the soldiers at the changing of the guard. The girls from the cigarette factory mingle with the soldiers, but Carmen remains aloof: she can only love one who flees, not one who loves her. Since Don José is ignoring her, she flings a flower in his face and runs off.

He hides it inside his tunic as Micaela returns, bringing a letter from his mother and a kiss, which he returns.

There is a disturbance in the factory, Carmen has stabbed another girl and Zuniga orders Don José to take her to prison, but she bewitches him into letting her escape.

ACT II
The tavern of Lillas Pastia
Carmen rejects the advances of Zuniga. She is waiting for Don José, who is about to be released from prison (he had been demoted and imprisoned for letting her escape). She also seems unimpressed by the toreador Escamillo, who makes advances to her.

As all leave except Carmen and her gypsy friends, Zuniga promises to return, despite her discouragement. She refuses to join the smugglers because she is in love. Hearing Don José´s voice, she tells the others to leave. He is jealous when he learns that she has danced for the officers, so she dances for him, but is interrupted by the bugle sounding the retreat. When Don José insists that he must return to barracks she accuses him of not loving her. He produces the faded flower, telling her it has stayed with him through his imprisonment.

If he loves her, she says, he will follow her to the mountains, but he is still resolved to leave. He is still there when Zuniga returns and disobeys Zuniga´s order to leave. They come to blows and are separated by the smugglers. Don José now has no choice but to desert and join the smugglers.

ACT III
A pass high in the mountains
The smugglers make camp. Don José regrets his present way of life, particularly as Carmen is disenchanted with him. As Mercédès and Frasquita lightheartedly tell their fortunes, Carmen consults the cards and reads her death in them.

Micaela is discovered. She has brought Don José a message from his dying mother and Carmen scornfully tells him to go. He swears that he will return.

ACT IV
Outside the bullring in Seville
Escamillo arrives for the bullfight, accompanied by Carmen. Warned by her friends that Don José is looking for her, she refuses to beware, but waits outside to confront him. As she continues to resist his entreaties and threats, he kills her as the crowd acclaims the victorious Escamillo. Having killed his beloved Carmen, Don José surrenders to the law.
Show more Show less