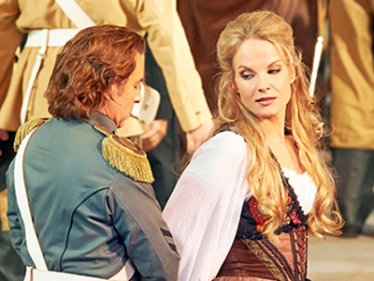 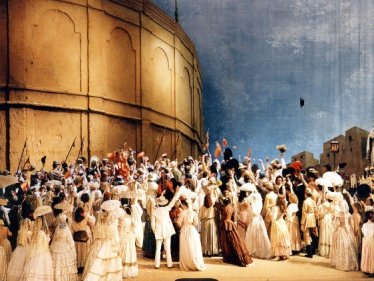 To many, Carmen is the archetypal woman who never allows anyone to rob her of her freedom, to others again an insatiable jezebel ultimately incapable of relationships and love. The stirring and emotionally charged melodies of this opera still enchant legions of listeners to this day.

ACT 1
A bright and sunny midday in Seville. There is a colourful, lively crowd on the square; nearby is a guardhouse and a cigarette factory. Micaëla, a girl from the country, is searching for Corporal Don José; but he belongs to the guard which is coming on duty. Announced by the children, the changing of the guards take place and José learns that Micaëla has been there asking for him. The lunch hour begins and the female workers come sauntering out; Carmen is among them. At the moment, she is surrounded by men, but it is fascinating for her to win the one who is not paying any attention to her – José.
Before Carmen goes back into the factory she throws him a flower. Micaëla returns again and reminds José of the wonderful time when they were first in love. She brings him a letter, some money and a kiss from his mother. Suddenly, a scream comes from the factory! Carmen has had a fight and has wounded another girl with a knife. José is ordered by Captain Zuniga to bring out the accused girl and after an interrogation to take her away to prison. But he quickly succumbs to her seductive charms and José permits her to escape.

ACT 2
In Lillas Pastia’s inn soldiers and gypsy girls are conversing and amusing themselves. Zuniga is trying to win Carmen for himself. He tells her that José, who was sentenced because of her escape, will be released from prison today. Escamillo, the famous bullfighter, enters the inn. He sings his “Toreador Song” and feels that he is winning Carmen’s affection. Hoping to see her soon again, Escamillo leaves the inn. Smugglers are trying to persuade the gypsy girls to join in their new venture. Carmen
refuses to take part because she is waiting for José, whose singing can be heard in the distance. He enters and greets Carmen, on whom he has thought of with burning desire. She begins to dance for him alone. At that moment, the sound of retreat is heard, which calls José back to the barracks. He wants to heed the call, but Carmen ridicules him. Also, his passionate decleration of love cannot change Carmen’s mind. But she now trues topersuade José to lead a free life with the smugglers. Zuniga arrives. José resists his command and the officer is politely turned out by the smugglers. Now, José is obliged to stay with the smugglers; which is what he originally did not want to do.

ACT 3
The smugglers are resting overnight in the mountains. Carmen has quarreled with her lover – José. Together with two gypsy girls she is asking the cards to tell her future. Her death is read in the cards. As José stays back to stand guard, Micaëla arrives. She hides herself quickly because José is shooting Escamillo; whom he has mistaken for a customs officer. A life or death struggle, between the two men, begins for Carmen’s favour. Just at the right moment, she separates them. Escamillo invites all of the smugglers to his next bullfight. Micaëla comes out of her hiding place to bring José to his mother’s death bed. He heeds her plea and follows her.