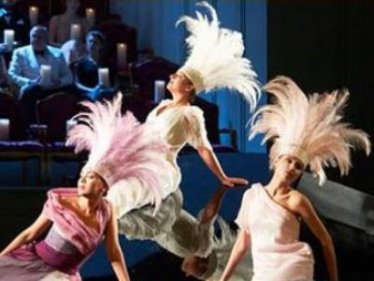 Delightful comedy in which the strange desire of a wealthy, but art ignorant authority to perform an opera and a musical play at the same time is finally realized yet successful.

The richest man in Vienna, a patron without any real understanding of art in cultural matters more gourmand than gourmet wants to pamper the guests at a soiree in his palace by a particularly rich offering: first a sumptuous meal, then the premiere of the new opera "Ariadne auf Naxos "to a" musical comedy in the Italian buffo style, finally at nine clock a crowning fireworks. The steward can orient the artists involved in this sequence. The representatives of the serious kind, in advance of the music teachers and the young composer of the commissioned work, are outraged by the comic sequel. The quintet, however, there are comedians lightly with the situation, especially as the dance master them predicts the larger audiences. When it was just about the scheduled start, can order the landlord about his arrogant agent with a recent change of mind: the two opposing pieces are not to go at the same time in a row, but in condensed form on the stage. For the rich man the mythical scene of a desert island by poor and tasteless, so should the staff of the farce that unpleasant defect to forget. The music teacher is at a loss, the creator of the opera labile despairs of the world. The prima donna and tenor do not occur and calm down until they hear that the new version just the other role is reduced. The resourceful dancing master explains his company briefly the plot of the opera, and recommends an improvised introduction to a suitable opportunity. Even the composer he can soothe irritated temporarily with a reference to the careers of his idols. But the trivial, frivolous words with which Zerbinetta their partners said the Ariadne substance excite him again. But with the utmost sophistication it is able to ensnare the pretty coquette: They too can a man be faithful, if only just the right meet. . . With passionate enthusiasm, the young artist's commitment to his "sacred music" and sees life suddenly in bright colors, to bring him back before the dazzling appearance of the actors in the reality. The events take their course, however, and the composer is the only criticism of his teacher: "... Who told me to pull you into this world, let me freeze to death, starve to death, petrified in the meinigenl"

The will of Theseus on the island of Naxos, abandoned princess Ariadne in her deep sorrow and forget just eagerly awaited death. The three spirits of nature Naiad, Dryad and Echo comment on its desolate condition. Since the turn Zerbinetta and their admirers. But the cheering song of Harlequin missed its effect. In a great monologue takes the death wish of Ariadne's visionary figure. Re-connect to the actors: "It is true whether jokes, singing good-whether from tears to dry a good eye." And Zerbinetta tries in a bravura aria for the consolation of woman to proclaim ("Who is the woman who had not suffered? Release! In despair! Exposed!") And, when Ariadne has retreated to her cave, her own life principle of the constant change: "When a god was all gone, and his step was already making me dumb ... Then she plays in an impromptu comedy their worshipers, the simple-minded Brighella, the daring Scaramuccio and clumsy Truffaldino against each other and gives Harlequin their favor.
Since announcing the spirits of nature a new turn. The young god Bacchus has moved out of the arms of the sorceress Circe and seam on his ship. The sight of Ariadne can be first on her lover Theseus, then think of the death messenger Hermes. But Bacchus their promises at his side a happy future: "I'll tell you now is only the life of lifts for you and me!" What the arts of Circe had failed, he experiences now, as a miraculous transformation in the feeling of first love: "You All You I'm the same person as I was the sense of God is alive in me ...!"
And follows as Ariadne on his arm of analysis ("my pain Do not be lost when you leave it alone, Ariadne"), is Zerbinetta constitutes the backdrop to their ambiguous rhyme: "If the new god approached, devoted we are dumb!"
Show more Show less