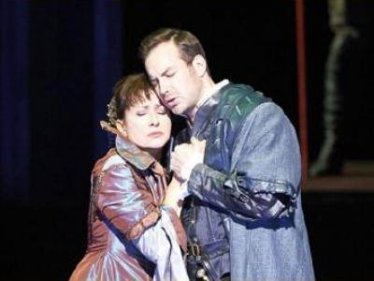 Courtiers comment that the queen’s star is setting, because the king’s fickle heart burns with another love.

Jane Seymour enters to attend a call by the Queen, Anna enters and notes that people seem sad. The queen admits being troubled to Jane. At the queen’s request, her page Smeaton plays the harp and sings to cheer the people present. The queen asks him to stop. Unheard by any one else, she says to herself that the ashes of her first love are still burning, and that she is now unhappy in her vain splendor. All leave, except Jane.

Henry VIII enters, he tells Jane that soon she will have no rival, that the altar has been prepared for her, that she will have husband, sceptre, and throne. Each leaves by a different door.

Lord Rochefort, Anna’s brother, is surprised to meet Lord Richard Percy, who has been called back to England from exile by Henry VIII. Percy asks if it is true that the Queen is unhappy and that the King has changed. Rochefort answers that love is never content.

Hunters enter. Percy is agitated at the prospect of possibly seeing Anna, who was his first love. Henry and Anna enter and express surprise at seeing Percy. Henry does not allow Percy to kiss his hand, but says that Anna has given him assurances of Percy’s innocence but she still has feelings for Percy. Henry VIII tells Hervey, an officer of the king, to be the spy of every step and every word of Anna and Percy.

Smeaton takes a locket from his breast containing Anna’s portrait. He has stolen it and has come to return it. He hears a sound and hides behind a screen. Anna and Rochefort enter. Rochefort asks Anna to hear Percy. Then he leaves. Smeaton peeps out from behind the screen, but cannot escape. Percy enters. Percy says that he sees that Anna is unhappy. She tells him that the king now loathes her. Percy says that he still loves her. Anna tells him not to speak to her of love. Before leaving, Percy asks whether he can see Anna again. She says no. He draws his sword to stab himself, and Anna screams. In the mistaken belief that Percy is attacking Anna, Smeaton rushes out from behind the screen. Smeaton and Percy are about to fight. Anna faints, and Rochefort rushes in. Just then, Henry VIII enters and sees the unsheathed swords. Summoning attendants, he says that these persons have betrayed their king. Smeaton says that it is not true, and tears open his tunic to offer his breast to the king for slaying if he is lying. The locket with Anna’s portrait falls at the king’s feet. The king snatches it up. He orders that the offenders be dragged to dungeons. Anna says to herself that her fate is sealed.

Scene One: London. Antechamber of the Queen's apartments

The guards note that even Jane Seymour has stayed away from Anna. Anna enters with a retinue of ladies, who tell her to place her trust in heaven. Hervey enters and says that the Council of Peers has summoned the ladies into its presence. The ladies leave with Hervey. Jane enters and says that Anna can avoid being put to death by admitting guilt. Anna says that she will not buy her life with infamy. She expresses the hope that her successor will wear a crown of thorns. Jane admits that she is to be the successor. Anna tells her to leave, but says that Henry VIII alone is the guilty one. Jane leaves, deeply upset.

Scene Two: Antechamber leading into the hall where the Council of Peers is meeting

Hervey tells courtiers that Anna is lost, because Smeaton has talked and has revealed a crime. Henry VIII enters. Hervey says that Smeaton has fallen into the trap. Henry VIII tells Hervey to continue to let Smeaton believe that he has saved Anna's life. Anna and Percy are brought in, separately. Henry VIII says that Anna has made love to the page Smeaton, and that there are witnesses. He says that both Anna and Percy will die. Percy says that it is written in heaven that he and Anna are married. They are led away by guards.

Jane enters. She says that she does not want to be the cause of Anna's death. Henry VIII says that she will not save Anna by leaving. Hervey enters and says that the Council has dissolved the royal marriage and has condemned Anna and her accomplices to death. Courtiers and Jane ask the king to be merciful. He tells them to leave.

Percy and Rochefort are together in their cell. Hervey enters and says that the king has pardoned them. They ask about Anna. Hearing that she is to be executed, they choose to be executed also. They leave, surrounded by guards.

In Anna's cell, a chorus of ladies comment on her madness and grief. Anna enters, she imagines that it is her wedding day to the king. Then she imagines that she sees Percy, and she asks him to take her back to her childhood home (Donizetti used the theme from the English/American song Home Sweet Home as part of Anna’s Mad Scene to underscore her longing). Percy, Rochefort and Smeaton are brought in. Smeaton throws himself at Anna's feet and says that he accused her in the belief that he was saving her life. In her delirium, Anna asks him why he is not playing his lute. The sound of cannon is heard. Anna comes to her senses. She is told that Jane and Henry VIII are being acclaimed by the populace on their wedding day. Anna says that she does not invoke vengeance on the wicked couple. She faints. Guards enter to lead the prisoners to the block. Smeaton, Percy and Rochefort say that one victim has already been sacrificed.
Show more Show less