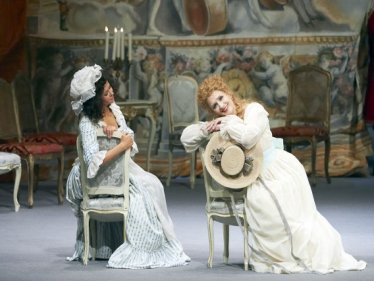 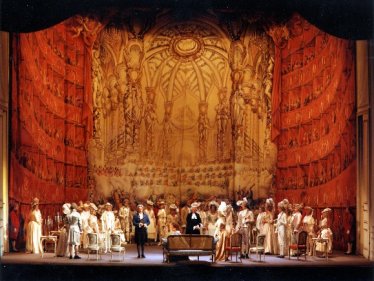 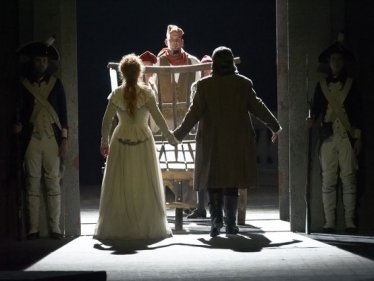 ACT I. Gérard, servant to the Countess de Coigny, mocks the aristocracy and their manners. Seeing his father struggle with a piece of furniture, Gérard laments the suffering of all servants under their arrogant masters ("Son sessant'anni"). Maddalena, the Countess' daughter, appears and Gérard admits to himself his love for her. Busy with preparations for that evening's soirée, the Countess scolds Maddalena for not yet being dressed. Maddalena complains to her servant, Bersi, about the discomfort of the current fashions and then runs out to change. Among the guests to arrive is Fléville, a novelist, who has brought with him the rising poet, Andrea Chénier. After the Abbé relates the latest depressing news from Paris, Fléville enlivens the party with a pastorale he has written for the occasion. Maddalena then teases the reluctant Chénier into improvising a poem ("Un dì all'azzurro spazio"). Chénier scandalizes the guests with his criticism of the indifference of the clergy and the aristocracy to the suffering of the impoverished. The guests' gavotte is interrupted by Gérard bringing in a group of starving peasants. The Countess orders Gérard out along with the rabble. The guests are then invited to return to the gavotte, but they take their leave instead, and the Countess remains alone.

ACT II. The Revolution has begun, and the Reign of Terror is in full force. To fend off Incredibile, a spy, Bersi pretends to be a daughter of the Revolution ("Temer? Perchè?"). Incredibile is not deceived and takes note of Chénier waiting for someone in the Café Hottot. Chénier is joined by his friend Roucher, who has brought a passport so Chénier may leave the country safely. Chénier says his destiny is to remain to find the love he has never had and to discover who has been writing him anonymous letters. Roucher suggests the letters are a trap by one of the ladies of the evening. A procession of dignitaries led by Gérard interrupts their conversation. Incredibile takes Gérard aside to ask about the woman for whom he is searching. Gérard describes Maddalena to him. Meanwhile, Bersi asks Chénier to wait at the café for someone who wants to meet him. Maddalena appears and reveals to Chénier that it was she who wrote the letters. They pledge to love each other until death ("Ora soave"). Incredibile, having spied Chénier and Maddalena together, brings Gérard to the scene. Gérard is wounded as Chénier defends Maddalena. Gérard, however, recognizes Chénier and sends him on his way, telling him to protect Maddalena. When the gathering crowd asks who wounded Gérard, he answers that his assailant was unknown.

ACT III. In the Tribunal courtroom, Mathieu, a revolutionary, is unsuccessfully urging the crowd to donate to the cause. Gérard, recovered from his wound, makes an impassioned plea for the motherland. Madelon, an old woman who has already lost her son and a grandson in the war, offers her last grandson as a soldier. As the crowd disperses, Incredibile appears. If Gérard wants to have Maddalena, Incredibile insists, he must first arrest her lover, Chénier. As Gérard writes the accusation, he is filled with remorse at the bloodshed he has caused in his rise to power now that his new master is passion ("Nemico della patria"). No sooner does he hand Chénier's indictment to the court clerk than Maddalena appears. Gérard admits to the trap he laid for her and to his overwhelming passion for her. Maddalena offers herself to Gérard if he will save Chénier. She has been a fugitive, her mother killed in the Revolution and their home burned ("La mamma morta"). Touched by her love for Chénier, Gérard promises to try to save him. The Tribunal convenes with an unruly mob in attendance. Chénier pleads for his life ("Sì, fui soldato"), and Gérard admits to the judges that the accusation he wrote was false. Nevertheless, Chénier is sentenced to death and taken away.

ACT IV. In the ruins of Saint Lazare prison, Chénier reads a final poem ("Come un bel dì di maggio") to his friend, Roucher, who then bids him a final adieu. Gérard and Maddalena are met by the jailer, Schmidt, whom Maddalena bribes with some jewels to allow her to take the place of another young woman sentenced to death. Gérard leaves to plead Chénier's case with Robespierre once again. Maddalena tells Chénier she is there to die with him. They share a last moment together ("Vicino a te") as the day dawns. When their names are called for the guillotine, they embrace the fate which will forever join them.
Show more Show less