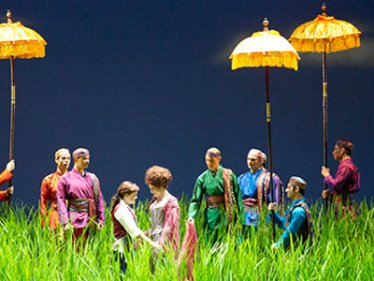 Bradamante, again searching for her lover, arrives on Alcina's island with Ruggiero's former tutor, Melisso. Dressed in armor, Bradamante looks like a young man and goes by the name of her own brother, Ricciardo. She and Melisso possess a magic ring which enables the wearer to see through illusion, which they plan to use to break Alcina's spells and release her captives.
The first person they meet is the sorceress Morgana. Barely human and with no understanding of true love, she immediately abandons her own lover Oronte for the handsome 'Ricciardo.' Morgana conveys the visitors to Alcina's court, where Bradamante is dismayed to discover that Ruggiero is besotted with Alcina and in a state of complete amnesia about his previous life. Also at Alcina's court is a boy, Oberto, who is looking for his father, Astolfo, who was last seen heading toward this island. Bradamante guesses that Astolfo is now transformed into something, but she holds her peace and concerns herself with Ruggiero. Bradamante and Melisso rebuke Ruggiero for his desertion, but he can't think of anything except Alcina.
Meanwhile, Oronte discovers that Morgana has fallen in love with 'Ricciardo,' and challenges 'him' to a duel. Morgana stops the fight, but Oronte is in a foul mood and takes it out on Ruggiero. He tells the young man exactly how Alcina treats her former lovers and adds that, as far as he can tell, Alcina has fallen in love with the newcomer, Ricciardo. Ruggiero is horrified and overwhelms Alcina with his jealous fury. Things get even worse when 'Ricciardo' enters and pretends to admire Alcina. Alcina calms Ruggiero, but Bradamante is so upset at seeing her fiancé wooed before her very eyes that she reveals her true identity to Ruggiero. Melisso hastily contradicts her and Ruggiero becomes very confused.
Alcina Meets Ruggiero, Niccolò dell'Abbate, c. 1550
Alcina tells Morgana that she plans to turn Ricciardo into an animal, just to show Ruggiero how much she really loves him. Morgana begs Ricciardo to escape the island and Alcina's clutches, but 'he' says he'd rather stay, as he loves another. Morgana believes that this other person is herself, and the act ends with Alcina's aria "Tornami a vagheggiar". (In some productions. this aria is sung by Morgana.

Melisso recalls Ruggiero to reason and duty by letting him wear the magic ring: under its influence, Ruggiero sees the island as it really is—a desert, peopled with monsters. Appalled, he realizes he must leave, and sings the famous aria "Verdi prati" ("Green meadows") where he admits that even though he knows the island and Alcina are mere illusion, their beauty will haunt him for the rest of his life.
Melisso warns Ruggiero that he cannot just leave; Alcina still wields immense power, and he should cover his escape by telling her that he wishes to go hunting. Ruggiero agrees, but, thoroughly bewildered by the magic and illusion surrounding him, he refuses to believe his eyes when he at last sees Bradamante as herself, believing that she may be another of Alcina's illusions. Bradamante is in despair, as is Alcina. Convinced of Ruggiero's indifference, she enters to turn Ricciardo into an animal, and Ruggiero has to pull himself together quickly and convince the sorceress that he does not need any proof of her love. It is at this point that the audience realises that Alcina genuinely loves Ruggiero; from now until the end of the opera, she is depicted sympathetically.
Oronte realizes that Ricciardo, Melisso and Ruggiero are in some sort of alliance, and Morgana and Alcina realise they are being deceived. But it is too late: Alcina's powers depend on illusion and, as true love enters her life, her magic powers slip away. As the act ends, Alcina tries to call up evil spirits to stop Ruggiero from leaving her, but her magic fails her.

After this the opera finishes swiftly. Morgana and Oronte try to rebuild their relationship; she returns to him and he rebuffs her but (once she is offstage) admits he loves her still. Ruggiero returns to his proper heroic status and sings an aria accompanied by high horns; Oberto is introduced to a lion, to whom he feels strangely attached, and Alcina sings a desolate aria in which she longs for oblivion.
Bradamante and Ruggiero decide that they need to destroy the source of Alcina's magic, usually represented as an urn. Alcina pleads with them, but Ruggiero is deaf to her appeals and smashes the urn. As he does so, everything is both ruined and restored. Alcina's magic palace crumbles to dust and she and Morgana sink into the ground, but Alcina's lovers are returned to their proper selves. The lion turns into Oberto's father, Astolfo, and other people stumble on, "I was a rock," says one, "I a tree" says another, and "I a wave in the ocean..." All the humans sing of their relief and joy, and Alcina is forgotten.
Show more Show less