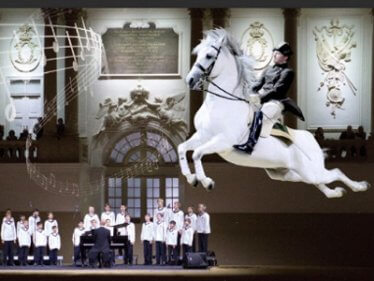 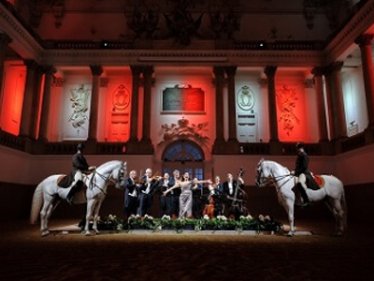 A Tribute to Vienna

Let yourself be whisked away on a musical journey back into the Austrian imperial period. Capriole, Levade and Johann Strauß – the performance of A TRIBUTE TO VIENNA will share the highlights of the Viennese ballet of the white stallions alternating with musical presentations of the imperial period. During the performance, the Spanish Riding School presents its most important exercises of the range of the High School in highest elegance and harmony, among others the “Pas de Deux” and the world famous Schools Above the Ground: the Capriole, Levade and Courbette. Professor Günter Seifert, member of the Viennese Philharmonic Orchestra, also presents a typical Viennese repertoire: from the Waltz Song of Johann Strauß Son “Out there in Sievering the lilac is blooming already“, the “Chineser Galop” by Johann Strauß Father, the “Jubelwalzer” by Joseph Lanner to the ”Radetzky March”, one of the most famous marches in the world, which traditionally concludes every new year’s concert and has a highly symbolic meaning for the Austro-Hungarian monarchy.

The Spanish Riding School and the Vienna Boys‘ Choir
Two of the most famous Austrian cultural institutions present their exceptional cooperation in the baroque ambiance of the Winter Riding School in the Imperial Hofburg Palace.
A TRIBUTE TO VIENNA shows the highlights of the Ballet of the White Stallions alternating with the musical performance of the world’s undoubtedly most renowned boys’ choir, the Vienna Boys’ Choir.
The “A TRIBUTE TO VIENNA” performances are moderated in German and English.