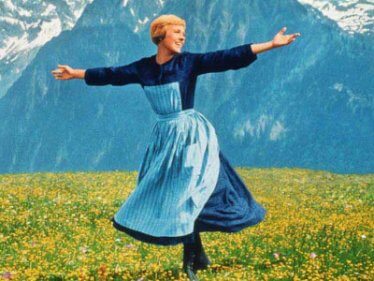 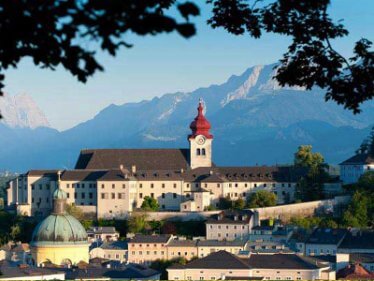 2) Leopoldskron Palace
Enjoy the spectacular view during a photo stop at Lake Leopoldskron mirroring the palace, where the famous boating scene was filmed. From there you will see the Captain´s backyard and private palace gardens.

3) Hellbrunn Palace, Gazebo
Remember the song "16 going on 17" scene as well as the kissing scene of Maria and Baron von Trapp? Visit the original gazebo rebuilt especially for all movie fans in the gardens of Hellbrunn Palace.

4) Nonnberg Abbey
You will pass by the Nonnberg Abbey which is still an active women’s convent nowadays. In this convent the "real" Maria was a novice and also got married to Baron von Trapp. The Abbey does not allow visits within its walls, but you are most welcomed to walk up to the front gate of their Gothic Church or to visit a church service after our tour.

5) Salzburg Lake District Area - St Gilgen
After touring the film-locations within the town of Salzburg, you will drive to the Lake District, passing Lake Fuschl and Lake Wolfgang, where panorama shots and scenes of the picnic were filmed. Enjoy the wonderful view down on to St. Gilgen and Lake Wolfgang at the photo stop!

6) Mondsee - Wedding Chapel
In Mondsee you see the famous church, where the wedding of Maria and Baron von Trapp was filmed in the movie The Sound of Music. Afterwards there will be some time to explore this little picturesque town on your own.